It was five years ago this week that I launched this blog, and little did I know that I'd still be writing it now when practically every other aspect of my life has changed.

But I'm glad that people enjoy it and I just wanted to say thank you to everybody who's ever visited the blog and read one of my gig reviews or other features. It's been a far bigger success than I could ever have anticipated, with over 60,000 hits and counting.

To mark the occasion, here's a rundown of my top ten favourite songs of the past five years, all of which I have mentioned on the blog before:


Bow down to the great Euphoria! Not just my favourite song of the past five years but now right up there among my absolute all time favourites.

Here's hoping to being here for another five, and finding ten songs just as good as these to make an ultimate rundown of the decade at the end of 2019!
Posted by Richard at 14:17 No comments:

When Calm After The Storm, a mellow country ballad by newly formed band The Common Linnets, was premiered as the Dutch entry for this year's Eurovision Song Contest, few people actually took any notice, including me regrettably. But the band, which was initially fronted by Dutch superstars Ilse DeLange and Waylon, went on to surpise the Eurofan community by delivering a stellar performance of the song at the semi-final stage and taking the contest by storm.

The hype quickly grew and the band did their country incredibly proud by finishing second, behind the iconic Austrian performer Conchita Wurst. And that was only the start of the story. The song went on to far exceed the commercial success of the winning entry, Rise Like A Phoenix, and became a hit across the continent. It even hit the top ten in the UK, absolutely unprecedented for a non-winner/non home entry. The band's beautiful eponymous debut album joined it in the charts across Europe and a whole new legion of fans were won. 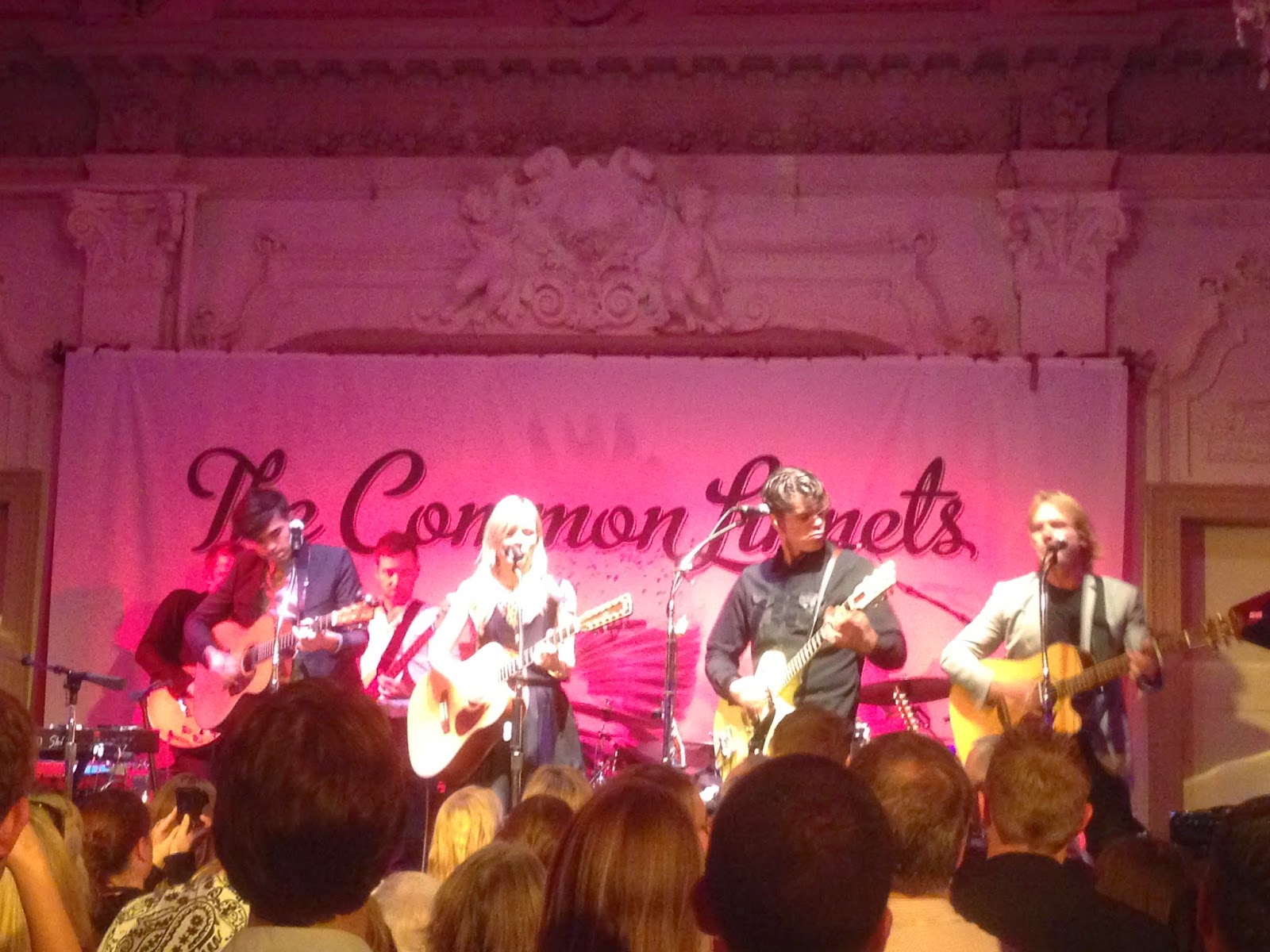 The success took the group, as much as everybody else, by complete surprise but Waylon still decided to leave soon after to continue his solo career, as had been the original plan. Ilse and other members JB Meijers and American Jake Etheridge have continued the band along with a number of other songwriters and musicians, including Americans Rob Crosby and Matthew Crosby, and last night marked their first (and only, to date) live UK appearance. And it was a real joy.

I'm rarely a fan of country music, with only American Idol winner Carrie Underwood's debut album Some Hearts having a really major impact on me in the last decade, although there have been a number of excellent singles from the likes of Sugarland, The Band Perry and Miranda Lambert. But The Common Linnets' debut album has quickly become one of my favourite LP's of the last few years, packed with instant melodies and finely crafted to perfection.

And, happily, the band sung a lot of the songs from that album in an epic set that lasted close to two hours and featured more than twenty songs. Singalong album highlights Lovers and Liars, Give Me A Reason (the current single), Time Has No Mercy, Sun Song, Still Loving After You and Hungry Hands all went down very well but what was surprising was the sheer amount of new material that the group played.

I counted at least six or seven songs that I'd never heard before which are presumably primed and ready for an upcoming new album. And I'm pleased to report that the album sounds every inch as great as the first, with many of the new songs sounding like instant timeless classics. Show opener Proud made for a fantastic group medley while Runaway Man, As If Only and Dust Of Oklahoma showed great potential.

Aside from the tried and tested and brand new songs from the band, the evening provided lead singer Ilse with a long overdue opportunity to sing some of her solo hits to the crowd, and judging by the reaction in the front few rows, it seemed like her longtime UK fanbase had showed up in their droves. Ilse was clearly ecstatic to be performing in London, and at the stunning Bush Hall, a large carpeted room with ornate chandeliers and fantastic acoustics.

She mentioned that she had supported US country legends the Dixie Chicks on tour at nearby Shepherd's Bush Empire in the late 90s. And as a nod to that she played the song Flying Blind, which she'd performed over a decade and a half ago at that concert, when she was in her early 20s and just starting her career in Holland. Other Ilse solo songs that received an airing included Next To Me and I'd Be Yours.

Ilse mentioned that the Eurovision experience had finally opened the door for her to extend her career outside of The Netherlands. A joy to watch from start to finish, it's a real shame that she never hit the big time in the UK, or indeed anywhere else other than her home country, with her solo career.

Despite being a show packed full of something for everyone to enjoy, it was the final half an hour which elevated it to another level. Calm After The Storm, and Ilse's charming explanation of how this one song had changed her life for the better, delighted the crowd and everyone happily joined in to sing with Ilse and JB on the stunning track. And album cut Arms Of Salvation was a brilliant closing song, another real full band moment.

And then the three song encore really packed everything in. The beautiful album closer Love Goes On, written by Ilse about the loss of her father, proved an incredibly emotional and sincere moment, while JB also dedicated the song to his late friend, the R&B legend Solomon Burke. The crowd were also treated to Ilse singing Happy Birthday to a fan before the show was closed out by another of her solo singles, I'm Not So Tough, which boasted a fantastic band jam session at the end of the song to send the evening off in style.

An absolutely brilliant display of magical melodies, fantastic harmonies and awesome guitar solos, this concert very much proved exactly how Eurovision can benefit the international career prospects for some of its participants. It might be seen as career suicide in the UK but the likes of ABBA, Celine Dion, Loreen and now, The Common Linnets, have proven that it's an incredible platform to take a career to the next level if the right artist delivers the right song in the right way.

I can only hope that the band's newfound success continues onto album number two, because they thoroughly deserve the praise and accolades that have been lavished onto them over the past six months, and they absolutely have to return to play in the UK again in the future.
Posted by Richard at 23:54 2 comments: