Safari - I Need You

During a random browse of various global iTunes charts a couple of weeks ago I stumbled across a song that sounded rather lovely in Norway's top 100. The 90 second clip of I Need You was enough to persuade me to download the full song and for the small expense of 99p I was treated to a beautiful gospel/soul song featuring some of the most beautiful harmonies and one of the most timless melodies I've heard since the 90s.

I Need You is a brilliant building ballad that almost sounds like a lost Mariah Carey or 90s girlband classic in parts. Gospel and religious music is something that I generally have little interest in but many pop singles have been improved with a gospel choir aided key change towards the end. And the odd gem still surfaces from the genre, like Caroldene's Time Is A Healer or the catchy new Destiny's Child (technically!) single Say Yes.

The Madden Brothers - We Are Done


American pop punk band Good Charlotte ruled the early 00s with their unrivalled run of earworms including Girls And Boys, The Anthem and Lifestyles Of The Rich And Famous. I was never a particular fan myself but the brothers Madden have clearly always had a way with a tune and their new venture displays this in spades. Joel and Benji, the twin brothers from the group, are back with a new single under the moniker The Madden Brothers, and We Are Done is an unexpected but rather fantastic sonic departure.

The sweet summery song features an irresistible whistling hook and rather subdued but effective verses that lead into a glorious 1960s style anthemic chorus reminiscent of the Beach Boys. But you can still hear the voices and charisma that made Good Charlotte such a success and if there's any justice this will become a huge hit single for the duo. It's already reached the business end of the charts in Australia, where Joel has been a judge on The Voice since 2011, and all bodes well for other territories to soon follow suit.

Australian pop/rock boyband 5 Seconds Of Summer have proved an instant hit in the wake of the international success of the likes of One Direction and The Wanted over the past few years. 5SOS have a slightly harder sound than even the rockier leanings from 1D and the group already have Kerrang on side, which is unusual for a boyband.

Their two hit singles so far, She Looks So Perfect and Don't Stop, have been perfectly serviceable pop tunes, the former being a strong statement of a debut single, but Rejects, the b-side to Don't Stop, displays far more future potential. A punchy air guitar intro smashes into an instantly memorable rock song about social rejection with verses and a middle eight that recall Busted and a chorus that has the hallmarks of Sum 41 stamped all over it. Frankly, Rejects should have been the single and Don't Stop the b-side.
Posted by Richard at 21:24 No comments:

A slightly random No.1 this week as Norwegian gospel act Safari climb to the top with the beautifully melodic I Need You, pushing Do You Even Know? by Rae Morris down a place to No.2. Andreas Bourani sticks at No.3 with former chart topper Auf Uns, former X Factor contestant Ella Henderson climbs to a new peak of No.4 with her UK smash hit Ghost and Cold by Rae Morris feat Fryars falls a spot to No.5.

In a busy week for albums Ed Sheeran smashes in at No.1 with the x, the follow up to debut album + which hit the top in 2011. The Common Linnets slide a place to No.2 after five weeks on top with their eponymous debut album and Lana Del Rey enters at No.3 with Ultraviolence, the successor to her stunning 2012 debut Born To Die. Clean Bandit fall to No.4 with New Eyes and Jennifer Lopez follows up her 2011 chart topper Love? With A.K.A. which enters at No.5.
Posted by Richard at 20:30 No comments:

A slow but steady climb to the top sees Blackpool-born singer-songwriter Rae Morris score her second No.1 with Do You Even Know?, over two years since Don't Go hit the top spot. It's one of two of her songs in the top five this week as Cold, a duet with Fryars, moves up to No.4. Norwegian gospel act Safari enter at No.2 with the beautiful I Need You and Germany's Andreas Bourani falls two places to No.3 with Auf Uns after two weeks on top. Australian star Sia rounds off the top five with her anthemic new single Chandelier which jumps to a new peak of No.5.

The Common Linnets make it five weeks on top of the album chart with their eponymous debut album, Clean Bandit stick at No.2 with New Eyes and Sara Bareilles moves back up to No.3 with her former chart topper The Blessed Unrest. Mariah Carey falls a place to No.4 with Me. I Am Mariah…The Elusive Chanteuse and Sam Smith rounds off a rare top five with new entries as In The Lonely Hour drops one spot to No.5.
Posted by Richard at 22:07 No comments:

A rather stable top four as Andreas Bourani spends a second week on top with Auf Uns and The Common Linnets remain at No.2 with Calm After The Storm. The duo also climb back to No.3 with Give Me A Reason while Rae Morris completes the top five with Do You Even Know, down a place to No.4, and Cold, a duet with Fryars, which debuts at No.5.

It's four weeks on top of the album chart for The Common Linnets with their eponymous album while Clean Bandit put up the biggest fight as they go straight in at No.2 with New Eyes. Mariah Carey falls a place to No.3 with Me. I Am Mariah…The Elusive Chanteuse, Sam Smith stays at No.4 with In The Lonely Hour and Sara Bareilles returns at No.5 with former chart topper The Blessed Unrest.
Posted by Richard at 22:30 No comments:

Despite only having one big hit in the UK, back in 2008 with global smash Love Song, Californian singer-songwriter Sara Bareilles has built up a strong fanbase on these shores and had to add this second London show following huge demand for the first confirmed date at the admittedly cosy Islington Assembly Hall.

The curious thing about her continued British support is that her latest album, Grammy nominated The Blessed Unrest, has completely failed to take off here. Yet Sara joked "This is the second and final night of our world tour but we feel really good about it," implying that her British fanbase is second only to her huge US support network.

Whatever the reason Sara had to bring her shows out of the US, it was great to see the on form singer perfecting her craft. With comparisons to a long line of piano tinkering American songbirds including Fiona Apple, Sarah McLachlan and Vanessa Carlton, Sara has managed to carve out her own identity over the past decade and despite admitting her nerves and missing a few words in second song Love On The Rocks, she enthusiastically chatted to the crowd throughout the night.

Show opener Uncharted, a single from Sara’s second album Kaleidoscope Heart, was a beautiful if subdued opening while the aforementioned jazzy punch of Love On The Rocks lifted the atmosphere and a segue into Elton John’s Bennie And The Jets at the end was inspired. 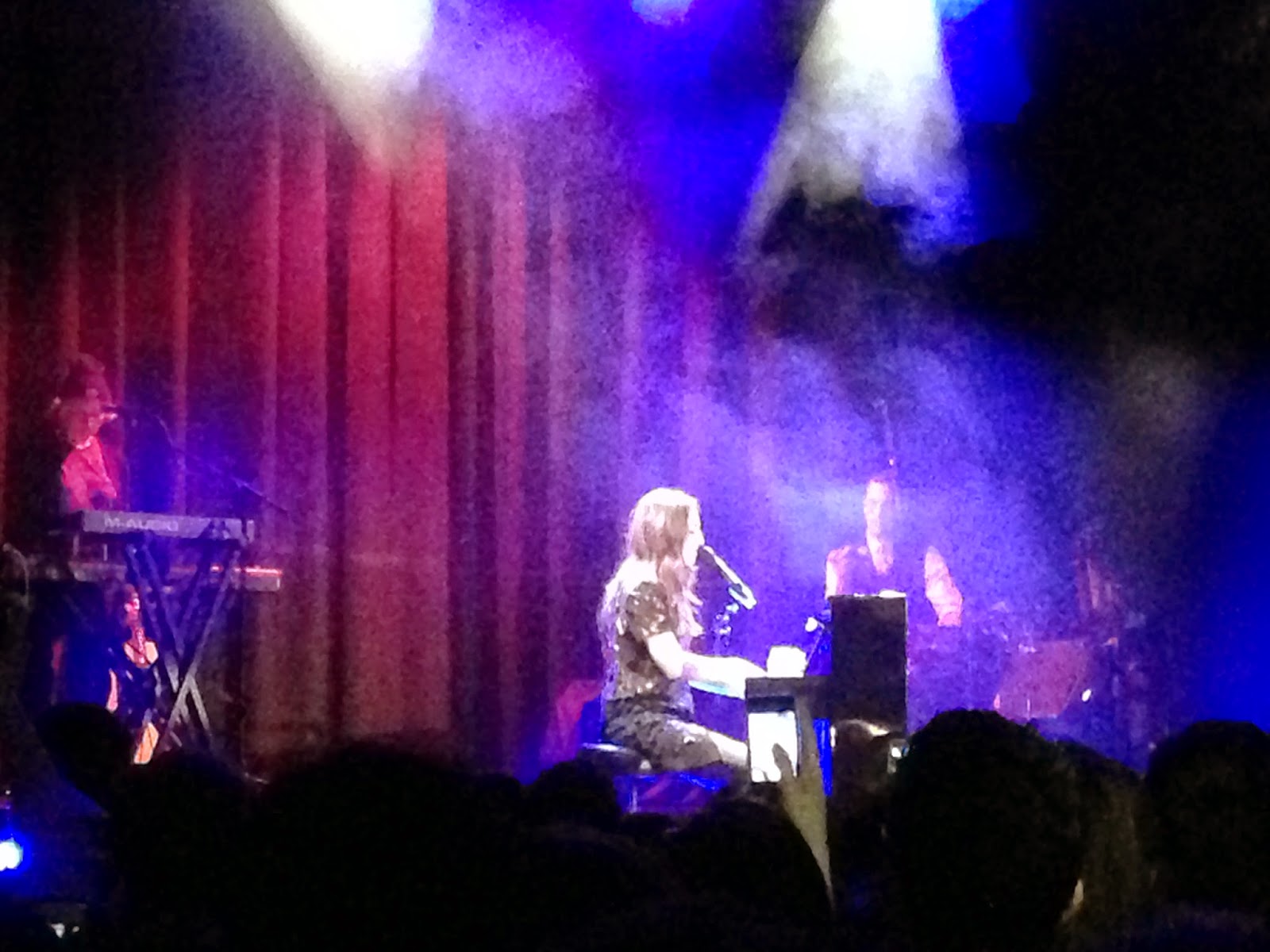 As the third song up, Love Song appeared curiously early on in the show. Still a classic pop single about rebelling against record company demands, the crowd sang along with great gusto and joined in by clicking along to an acapella part midway through the performance.

The gorgeous Chasing The Sun surprisingly had large parts of the crowd joining in. An otherwise anonymous album track, it proved that all of Sara’s die-hard fans had turned up for this show with many knowing every word.

Things became slightly more downbeat with the performance of Hercules, a song which Sara says was written at a time of deep depression when she had ended a long term relationship, split with her band of 10 years and leaving her home of 14 years in Los Angeles and moving to New York City. December and Gravity continued the theme although Sara stressed that she was actually a generally happy person, despite what her lyrics might suggest. “I don’t think of myself as a depressed person!" exclaimed the troubadour.

Sara got a guitar out for the Jack Johnson-esque Beautiful Girl, one of two bonus tracks on the Japanese and US deluxe editions of The Blessed Unrest. Parking Lot, the other bonus track, which Sara says she doesn’t play much, was performed later.

A soulful cover of Otis Redding’s Sitting On The Dock Of The Bay got the crowd singing again and her clear but emotive voice was in perfect form and reaching some powerful notes by this stage of the show. 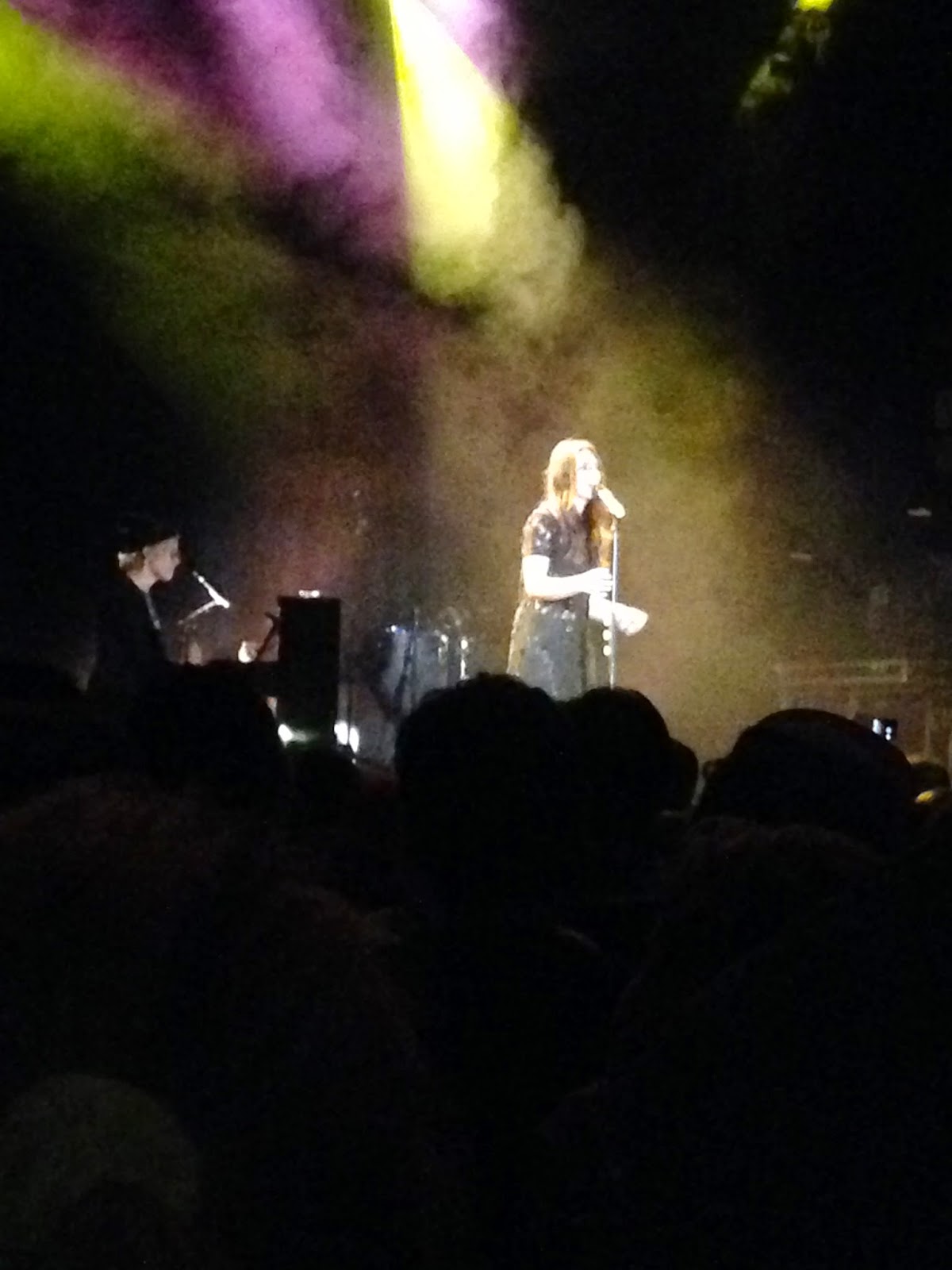 Jaunty and cheery new single I Choose You and toe-tapper King Of Anything, the radio hit that never was (unless you work in Debenhams where it’s played 10 times a day) came towards the end of the show with the crowd rhythmically clapping along.

Sara’s recent international hit Brave (though criminally only a mere top 50 ‘success’ in this country) was the announced final song. A positive anthem of being free to be who you want to be, it’s a great motivational anthem with a positive message and the crowd happily joined in on the chorus in an almost gospel-choir fashion.

Rapturous applause followed and the inevitable encore included the classy Come Round Soon where Sara came out with an electric guitar and showcased her best vocals of the night. She closed the show with another Elton cover, this time a beautiful rendition of Goodbye Yellow Brick Road.

Overall it was an impressive show and Sara was on top form, with the crowd eating out of the palms of her hands throughout. A strong mix of old and new material, and a healthy double nod to Elton John for good measure, the only strange thing was perhaps the order of the setlist and some of the curious inclusions.

No doubt Sara enjoys performing the two Japanese bonus tracks but it was clear that many of even the most loyal fans hadn’t heard the songs before. Perhaps Manhattan, Little Black Dress, City, Gonna Get Over You or Bottle It Up would have been better inclusions. But it’s a small quibble as both were interesting songs that Sara had personal reasons for performing.

The show proved that Sara deserves to be a much bigger star worldwide. The Blessed Unrest was nominated for Grammy Album of the Year for a reason; it’s one of the best releases of the last 12 months. Hopefully the next world tour will be far bigger than a two-show affair at a small London venue!
Posted by Richard at 13:52 No comments:

Despite a huge turnover in the album chart this week, The Common Linnets easily make it three weeks on top with their eponymous debut album! Mariah Carey leads the charge of debuts with new album Me. I Am Mariah…The Elusive Chanteuse smashing in at No.2! Röyksopp & Robyn arrive at No.3 with their five track mini album Do It Again, Sam Smith enters at No.4 with In The Lonely Hour and Anna Abreu returns with V which is new at No.5!
Posted by Richard at 09:14 No comments: